Stormy today—every appearance of the commencement of the annual Equinoctial Storm.

Friend Morgan called on me this evening, and we went to the Arch St. Theatre, to witness several amusing farces.

According to a popular belief, severe storms occurred at or near the autumnal and vernal equinoxes. For more, see the entry for March 15.

There were four farces on the bill at the Arch Street Theatre (also known as Burton’s Theatre) for Nathan and his friend, James H. Morgan, to enjoy.

The Lawyer’s Practice. A very obscure play. No further information could be found.

Mose in California, written in 1849 by Benjamin A. Baker (1818–1890), was one of a series of “Mose” plays which started with the hugely successful A Glance at New York (1848). Mose, a Bowery B’hoy*, is a butcher by trade, a volunteer fireman, and loves nothing more than a “muss” (a brawl; see the entry on prize fighter and former meat-cutter Tom Hyer).  Mose is a rough character with a heart of gold. The more refined theatre critics were disgusted with the Mose series but the public could not get enough. Nathan and James saw Frank Chanfrau (1824–1884) play Mose (Chanfrau’s Philadelphia debut with the character) on this Thursday night. While Baker created the character, it is Chanfrau who perfected him, playing the part with such realism that audiences were initially fearful.  The role, which he may have played some 4,000 times, made him rich. 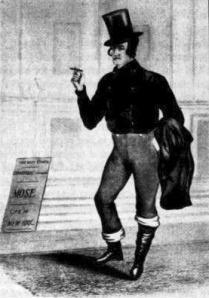 *Richard Briggs Stott described a Bowery b’hoy as more than a gang-member, he was an exemplar of a life-style. Rough in language and deportment, a b’hoy wore “wide suspenders, polished boots, a cigar clenched in his teeth. [He had] ‘soaplocked’ hair, greased down, long in front of his ears and short in back.” (Jolly Fellows, p. 104).